Servais has left his former home of classical and folk music far behind to embark on a path that turned out to be far more arduous than it seemed.

He has decided to realize his musical ideas that function like a mixture of minimal music, nightclub jazz, musette and the love for the sensitive, on the diatonic button accordion. 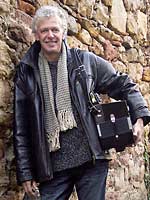 For those who are not familiar with the world of the accordion, an explanation: The diatonic button accordion, also known as melodeon, is a folk instrument providing two major and a minor scale and the accordant basses and chords to accompany the whole thing.

Fortunately, Servais’ instrument also possesses a row of semi-tones, so that more possibilities open up.

Furthermore, the instrument is bi-tonal, which means that with one button two different notes can be played, depending on whether the bellows are pushed or pulled. The instrument was traditionally built in a way that was handy for folk pieces, but would make it hard or impossible to play any other thing on it.

Servais’ compositions and empathetic arrangements often go beyond that scope. His accordion sets foot into spheres where it hadn’t had a place yet.

Only his considerable tricks enables him to duplicate the sounds he hears in his imagination into the real world of a live performance.

Certainly it would be easier to play a chromatic instrument, but to Servais it’s a challenge perceiving the diatonic accordion as a full-fledged instrument, on which all is possible - even if it’s actually not…

A lot in his music is reduced to the essential bottom line and Servais is modest enough, to leave out over elaborate soli, that literally seem to force themselves out of the piece (for fellow players an unusual challenge). As a result he gains a remarkable clarity and strength of statement.

The extent, range and vehemence which are hidden in Servais’ unobtrusive compositions can be heard in his arranged ensemble pieces or at the Akkordeonale. And it is here that it becomes clear, Servais’ music is an expression of a folklore for whom no folk has yet been found!

One of Servais’ dearest activities is his manifold ensemble work with exceptional or impossible instrumentation (one only thinks of the combination of e.g. tuba, violin, recorder, drum kit, flugelhorn, ocarina and hurdy-gurdy or ten harps and an accordion…).

Thanks to his versatile work with groups, like Appellation Contrôlée (avantgarde), Quatro Ventos (fado and Portuguese music), KlangWelten-Festival (world music) and his activity as a composer for various productions at music theatres and for film documentaries, Servais brings into play most diverse musical material.

With great expertise and his unique humour he leads his musicians into a musical world unknown to many of them before. Servais also gives accordion workshops in a variety of fields.

Servais Haanen's CDs “Cataract”, “Temporale”, “The other half oft he balance“ and “Akkordeonale Compositions”, as well as additional information and sound samples can be found in the Akkordeonale-Shop.